Everything You Need To Know In 6 Minutes 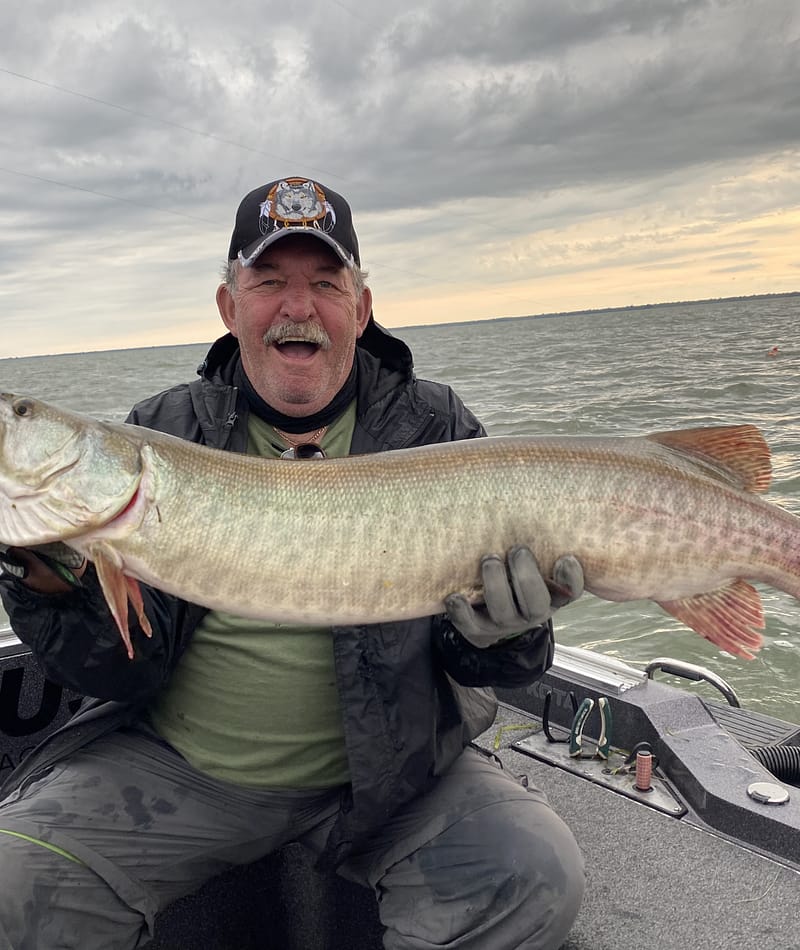 Where Do I Start?

Probably the most popular question among anglers who are looking to fish the trophy waters of Green Bay. The Bay of Green bay is an arm of Lake Michigan, located along the south coast of Michigans Upper Peninsula and the east coast of Wisconsin. Green Bay is a HUGE body of water! The bay is about 120 miles long, with a width ranging from 10-20 miles wide, approximately 1626 square miles! Like I said is MASSIVE! How does the average angler even pick a location where to start? Being successful on the bay comes down to many different key factors, I will try and break some of these down by seasons. The fish are always on the move on the bay, follow these tips to keep up with them!

Spring musky fishing on Green Bay is one of my favorite times of the year. Whether fishing in one of the many major river systems ( Fox River, Oconto River, Peshtigo River, Oconto River or Menominee River) or out on the bay itself, Spring offers one of the best times of the year at true Green Bay Trophy. Fish are typically up Shallow! I target extremely skinny water, 1-2’ typically shoreline areas. Musky’s typically spawn in water between 50-60 degrees, but I have seen fish still spawning in water as warm as 70 degrees. I believe there are several “waves” of fish that will show up to spawn in the rivers and shoreline areas of Green Bay at different times. Our Musky season in Wisconsin is closed during the peak of the musky spawn, to protect these delicate fish. Targeting post spawn musky’s is a great way to put several fish in the boat. Fish are hungry and active and on the move. Typically once you find a fish or an area holding fish, there will be several fish in that area. Some of my favorite spring lures for targeting shallow water musky are single 8 bucktails, double 8 bucktails, glide baits, topwater, shallow invaders, and plastic swimbaits. The later into the spring you get, with rising water temperatures, fish will start leaving the rivers and shorelines and can be found on adjacent shallow flats where the fish stage to feed. These are also great areas to target. Trolling can be a very effective way to cover water in search of fish. Pay close attention to your electronics (especially sidescan) when fishing shallow sandy flats. You will be able to see the fish if they are there!

Once the fish on Green Bay have made it to their summer patterns there’s several presentations used to catch them. First off we have to find the fish before you can catch them, once again utilizing electronics is key! Summer fish typically move out to deeper, cooler water, but not all go deep. Some fish will make home in the shallow weed beds/edges adjacent to deep water. Deep mud flats is a great area to search for roaming summer musky. Fish stage in 20-40 foot of water for most of the summer in the mud flats for a number of reasons. Food is the main reason, lots of bug hatches brings in baitfish, which the musky are not far behind. A thermocline will also set up in the deep water that will attract the musky and baitfish. Fishing the edge of the deep structure can be a great place to start looking for fish also. Lots of baitfish, alewives, whitefish and white perch use the structure to spawn when the water warms. The Musky will not be far from the food! Trolling is my preferred way to target these summer musky as they are always on the move. Wisconsin allows three lines per person, so trolling with multiple people cam be a great way to cover water and put fish in the boat. These are some areas myself as a Green Bay Fishing Guide looks for in the summer.

There are two major areas to talk about in late summer into fall. Late summer, mid July- early sept, is probably the best time to catch a musky on Green Bay. Casting weedbeds is my go to for this time of the year. Cool late summer morning have the musky’s sliding in the shallow weedbeds in search of food. The weeds are full of perch and walleye this time of the year, making an easy meal for a Green Bay Muskie. Casting big bucktails, big rubber, and big swimbaits are a few of my favorite lures to use. Trolling can also be utilized this time of the year if casting is not your preferred method. Trolling the tops or edges of the weed beds can be very effective. Big bucktails, double 10 cowgirls are my favorite, along with Dadson blade baits double 10. Whatever your preferred method is this time of the year make sure to target weedbeds, and the edges of weedbeds for success with GIANT Green Bay Musky!

Fall on Green Bay is a magical time to target and catch musky. The chance at a 50 pound plus Green Bay Musky doesn’t get much higher then it can all year in September into October. The first big cold front of late summer ( normally associated with a big north wind) will get the fish back on the move. Fall musky fishing on Green Bay means one thing, BAIT. The fish will start leaving the weedbeds and start roaming the open water again in search of baitfish. This time of the year I like to target 5-15 fow. Normally starting my search on big flats near the summer weedbeds. I will typically troll this time of the year, covering as much water as possible. Once you find the fish using your electronics, pound those areas over and over. Musky on Green Bay feed heavily in short windows. Its very common to go hours without a bite, and catch 2-4 fish in a hour or less once the feeding window opens. If you’re confident the fish are in the area you’re fishing, pay attention to lunar activity, such as Moonrise, moonset, underfoot, overhead, majors and minors. More than likely you will be rewarded! The cooler the water gets as the fall progresses the fish will migrate toward the river mouths again. The lower bay, has a huge shad spawn in the fall and the musky gorge themselves before winter. The fish will migrate back south as the shad stage and move into the rivers. The fox river is a great place to start in fall when searching for fish. Fishing the edges of river channels can be a great area to start this time of the year also.

Green Bay is an amazing fishery and ecosystem. Many experts think the next world record musky swims in the waters of Green Bay. There’s no doubt Green Bay offers some of the best musky fishing in the world. The average size of our fish makes it hard to fish anywhere else! The bait is always moving and so are the fish. Staying on the Musky’s can be the hardest part of the game. Hopefully these tips will help you put more fish in the boat!

Ready To Book Your Next Fishing Charter?

Please fill out the short form to submit your booking trip request and one of our fishing or hunting guides will get in touch with you within 24 hours. For a faster response time call our direct number – 414.484.7768. Whether your in Green Bay, Oconto, Door County, De Pere or Shawano, Epic Guide Service is the best guide service to reel in your next trophy fish.